Waze is a live GPS traffic and navigation map app with a strong focus on the community. Using live satellite tracking, it continuously refreshes data and offers free GPS route imaging to users. Nevertheless, Waze has a Business model that allows you to earn by its features.

The app offers turn-to-turn GPS direction information, as well as user-submitted journey times and road details. It’s available to anyone who has a smartphone or tablet.

The app’s goal was to provide a free digital record of Israel’s road maps, track traffic congestion, and deliver new data from the community’s live submissions.

To commercialize FreeMap Israel, Ehud Shabtai founded the firm Waze in 2008. Waze Mobile Ltd. was the new name given to the company in 2009.

The company raised $55 million in financing in 2010. Street fairs and protests have joined the app since then, thanks to community contributions. A little indicator shows when a phone is near a specific area, inviting the user to interact.

In November 2012, the company began to commercialize its app, allowing resellers and advertisers an interface to promote based on location.

Waze also provided a web interface for different TV news stations to broadcast traffic updates and alerts directly from the Waze app. The service started at 25 US TV news stations in June 2013.

The purchase of Waze by Google in June 2013 was part of the company’s effort to improve Google Maps.

Waze download is available on iOS and Android, both platforms.

By the end of 2018, Waze was available in 185 countries and had amassed over 115 million monthly active users.

Waze is still a standalone app as of today. 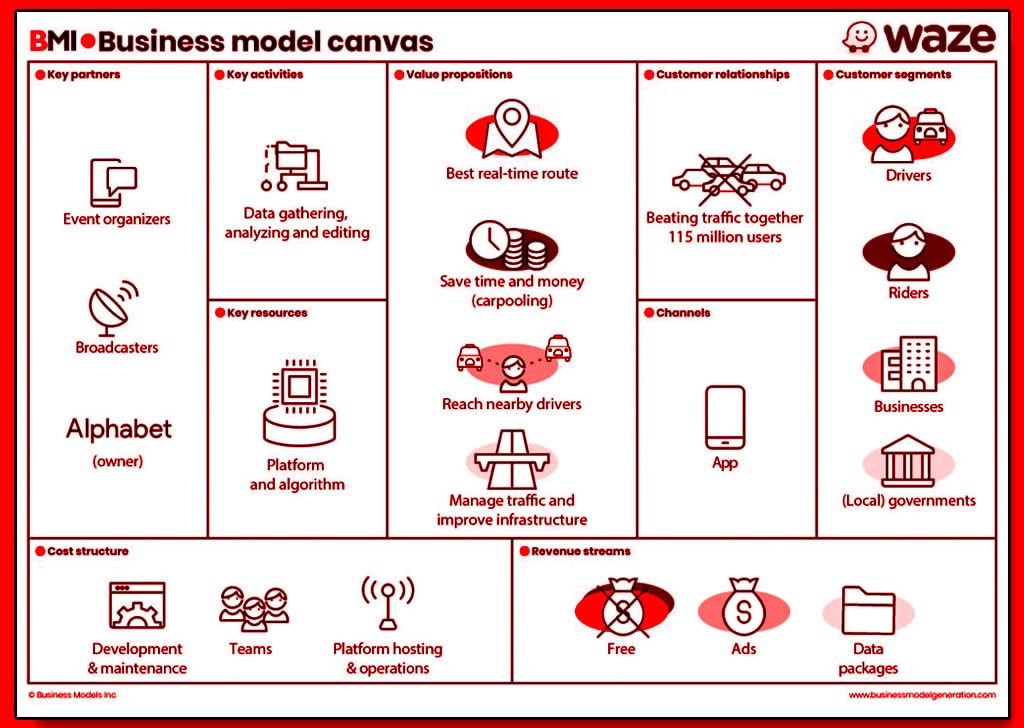 By using the Waze app, travelers may share and update information on sights and sounds they come across on the way. No matter the issue– traffic congestion or activity by the police or roadblocks or accidents or even constructions, Waze’s algorithms will compute the optimum course and adjust route planning in real-time with every update supplied by the app’s users.

For Waze, this implies that its users effectively enhance the app itself with each use by providing free traffic and navigation services while also collecting valuable data that aids in increasing Waze’s offerings in this area.

Thus, we get the most important business partners who contribute to Waze’s success.

Motorists use Waze’s navigation services. For this reason: Waze’s intended audience uses the app almost exclusively for navigating. They don’t add much to the app themselves, but they do offer Waze location-based data.

In addition to the real-time information provided by other Waze app users, this data is helpful on its own.

To determine the best route and offer real-time updates for other Waze users, Waze users report road circumstances such as police, traffic, or speed traps.

Ads and banner spaces are available on Waze for companies and enterprises to sign up. This advertisement displays in real-time depending on the location of the user, thanks to Waze.

Waze gets its maps from several different places. Waze began by creating its maps from scratch using base maps, containing only the necessary shapes of topography and structures. The editors at the company have made changes to these base maps.

When the program was in beta, it obtained map data from OpenStreetMap, a free editable map that anybody can use under the ODbL license.

Waze’s Map Editor interface lets users make edits to their maps. Before its acquisition by Google, this interface used Bing Maps API for map data; after that, it switched to utilizing Google Maps API (but doesn’t have to pay for it because Google owns it).

As with every other mapping and navigation program, Waze works in the same way:

To monetize Waze, the company uses location-based in-app advertising and charges users on a per-click basis. In addition, Waze specifies the following ad types for advertisers:

Unlike ride-sharing apps, which pair up full-time and part-time drivers, Waze Carpool promotes standard daytime drivers to participate in carpooling.

Waze Carpool is accessible in the United States, Mexico, Brazil, and Israel. Carpooling can be accessed using the standard Waze app by users. Drivers must download the Waze Carpool app to participate in carpooling, free and accessible for iOS and Android.

Carpooling on Waze is free up to two times a day for each driver, with riders paying a maximum of 54 cents per mile for convenience. A variety of additional factors determines the cost of each ride. Riders in Waze carpool can expect to pay the following prices:

Waze can make money by selling the traffic and map data it collects. Even if it’s insignificant, the ability to provide targeted ads based on location and user data was a significant factor in Google’s decision to purchase Waze.

Why does Waze work?

Waze’s success can be attributed to its ability to view traffic from a human perspective, distinguishing it from competitors.

Machines have a tough time appropriately interpreting traffic scenarios because it is impossible to program devices to account for every possible scenario. Example:

A police officer can dynamically reroute traffic and efficiently respond to changing circumstances, whereas a machine must be programmed for every situation it will encounter. On the other hand, Waze gets around this problem by combining the best of both worlds- It uses algorithms to skim through data provided by its users and provide real-time updates, which are truly valuable.

Waze reaps the benefits of the network effect as well. Each additional user on the platform adds value to other users by providing more real-time traffic information, location data, and the ability to map more locations.

Based on the response, Waze also takes advantage of communications about themselves, their location, what they’re doing, and the time they’re sending. Unfortunately, there was no such service available at the time, but Waze quickly filled the need with its crowd-sourced app.

Google’s bid of $1.3 billion for Waze was a significant move on Google’s part. The purchase of Waze allowed Google’s crowd-sourced data to help improve Waze’s services even though Google already had a popular mapping business.

The business intends to provide better route alternatives based on Waze’s data gradually integrated into Google Maps. The Google Waze API allows third parties to use Waze’s map data (but not the user-added or traffic data).

Why Google hasn’t merged Waze with Google Maps becomes more precise now. It’s because Waze is distinct enough to stand on its own.

Start Waze with the beginner package on some of your locations in more densely populated areas and offer a unique giveaway or sale that potential consumers could find worthwhile enough to stop by and claim. If the difference in in-store traffic is significant, expand the number of locations.

Waze can also find the cheapest gas station near a user or along their path (if the country’s gasoline prices have been enabled in Waze).

Adding to that, Waze sends anonymous data to its database, including users’ speed and position, to improve the overall service.

And also, Waze collects map data, trip times, and traffic data from users and feeds it to the Waze server for free.

Users who have signed up for Waze are introduced as Wazers, can report accidents, traffic congestion, speeding, and police traps and amend roads, landmarks, and house numbers using the online map editor.